I wrote Organic Chemistry on a whim.  An internet friend had told me that her son has Asperger's Syndrome and that he never really got to see himself in a story.  So I set out to change that.  I am by no means an expect on Asperger's but I did some basic research, threw in some of my own imagination, and came up with Brenson.  By the time I was done writing the story, I'd pretty much fallen in love with the guy.  He's smart, sweet, to a degree very innocent, but also willing to open himself to love, once he pulled his mind out of his research and realized that's what's being offered.  Josh on the other hand was much simpler.  I'm a geek at heart and in creating Josh, I wanted Brendon to hit the boyfriend jackpot, so to speak.  There is another story in the series, Biochemistry.  It will be released later this year.  It centers on new characters, but both Josh and Brendon make an appearance. 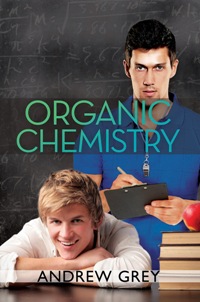 Brendon Marcus lives for his work. A boy genius who fast-tracked his way to college professor by his early twenties, he doesn’t know any other way to be. People confound him. So when Josh Horton, the assistant football coach, pursues him, Brendon isn’t sure what to make of him.

Josh has his own problems. His successful parents aren’t particularly happy with his career path, and some of the players don’t like having a gay assistant coach. He begins to have doubts, but Brendon makes the world look a little brighter.


An hour later, he didn’t have much. His frustration was blocking his thought processes, he knew that, but he was so angry at himself. And to make matters worse, the text he’d received that had caused the whole collision earlier was some marketing thing from his service provider. Texting and driving was dangerous, Brendon reminded himself, but he shouldn’t walk and text at the same time—it could be detrimental to his research.

A knock sounded on his door, which Brendon ignored at first because he was just starting to make progress. It sounded again, and he reached behind him and opened the door before returning to his typing. “Can I help you?” Brendon asked as he finished getting down one of the ideas he’d had.

“I’m sorry, but I think you dropped this earlier.”

Brendon turned to see the huge man he’d collided with in the hall holding the notepad. Brendon nearly snatched it out of his hand and then looked through it.

“Thank you,” he said with a relieved sigh. It was all there, and as soon as he saw his writing, the ideas he’d had flooded through his mind once again.

“I found it halfway down the hall, and it took me a while to locate you. I kept looking for a student,” he said, and Brendon glanced up to find the man looking him over. “I’m Joshua Horton. And no, I’ve never heard a who.” Brendon looked at him blankly, wondering what he was talking about. “Dr. Seuss, you know.”

Brendon shook his head. “Never read any of that stuff.”

“No way,” Joshua said. “How could you have missed that?”

“When other kids were interested in things like that, my mother was helping me read Treasure Island.” Brendon put down the notepad. “I’m Brendon Marcus,” he said, holding out his hand. “I’m an associate professor of chemistry.”

“My friends call me Josh or Freight Train. I’m the new assistant football coach,” Josh said as he pumped Brendon’s hand hard. When Josh released it, Brendon’s hand tingled, and he wondered where that had come from. Maybe Josh had caused nerve damage or something. “Sorry I bumped into you and spilled all your stuff. Did you get everything back?”

“I did now,” Brendon said with a smile of relief. “Thanks again. I had a bunch of ideas in there, and it was going to take a lot of time to try to recreate them.” Brendon wondered exactly how long he had to chitchat before he could return to his work. Eventually he began to shift in his chair. “Um, I need to get back to work now.”

“Okay. I should be going, then,” Josh said, and Brendon turned around and returned to his computer, but he didn’t hear Josh leave and eventually he turned back around. “Is there something I forgot?” He started to run through the social conventions his mother had taught him. Brendon never seemed to understand other people. He didn’t read facial expressions well, and vocalisms like sarcasm were simply beyond him. Lots of people thought he didn’t care, but he did care—he simply didn’t understand. Should he have offered Josh coffee? He didn’t think so. They really didn’t know each other. He reached for his wallet. “Do you need a reward?” He already had his wallet in his hand when Josh touched his arm.

Brendon looked at him, confused. “I need to go back to work, but you’re still standing here. Therefore I must have forgotten something, but I can’t figure out what it is.” Brendon was becoming agitated as he twisted his seat around and stared up at Josh, the Freight Train guy.

“You didn’t forget anything, String Bean. I was just trying to figure out how to ask if you might like to get some dinner or something?”

Brendon blinked. “No, thank you. I’m not hungry and I have to finish my work.” Brendon turned around to face his computer again. If the man didn’t leave now, he didn’t know how he could get him to go. He heard nothing from behind him, and for a second he thought Josh might have left, but then he heard laughter. “I don’t think I said anything funny,” Brendon said, looking over his shoulder.

“I wasn’t asking you to get dinner now. I thought I could come back here about five o’clock, and we could walk someplace nearby to get something to eat.” Brendon felt Josh place his hand on the back of his chair. “You do eat, don’t you?”

“Of course I eat,” Brendon said. “Everyone has to eat.”

“Then would you have dinner with me tonight?” Josh asked.

“Okay,” Brendon said and then turned back around to go to work. “But I don’t eat squishy food or fishy food.” He began typing. “Or stringy meat.” He shivered at the thought of eating any of that stuff. “It all feels funny.”

“Okay,” Josh agreed. “I’ll meet you here at a little after five for a nonsquishy, nonfishy, no-stringy-meat meal.” Brendon nodded and continued working. “Okay, I’ll see you then,” he heard Josh say, but he was already descending into his work and he barely noticed when the door closed. Brendon continued working for about five minutes and then stopped, resting his fingers on the keyboard. He was having dinner with someone. Like, as a friend. Without thinking, he brought up the Internet and began searching for articles on the right social conventions for a situation like that. Did he need to bring a gift? Should he have money to pay? The sources he found said he didn’t need to bring anything unless he was going to someone’s home for dinner, in which case he should bring something small, but it also said he should be prepared to pay for his own meal. He decided he could handle that, so he went back to his work.