Love Comes in Darkness, the follow up to Love Comes Silently released at midnight last night. This story really truly touched my heart. The opening scene with Howard in the car and being left by the side of the road came to me while I was laying awake one night. The helplessness, loneliness, and fear of being stranded that way had me shaking and I couldn't get those feelings to go away until I'd written the scene. 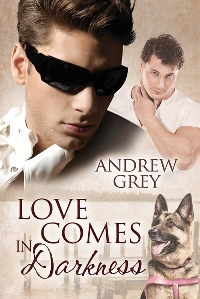 Howard Justinian has always had to fight for his freedom. Because he was born blind, everyone is always trying to shelter him, but he’s determined to live his life on his own terms.

When an argument with his boyfriend over that hard-won self-reliance leaves Howard stranded by the side of the road, assistance arrives in the form of Gordy Jarrett. Gordy is a missionary’s son, so helping others is second nature—and he does it in such an unassuming manner that Howard can’t say no.

Life is barely back on track when Howard receives shocking news: his sister died, leaving him her daughter to care for. Howard now faces his greatest challenge yet: for Sophia’s safety, he’ll need to accept help, but will he learn to accept it from Gordy, the one man who will not curb his independence?

“You’re going too fast,” Howard Justinian said. He sat with his arms planted on the armrests.

“I didn’t mean that and you know it,” Howard retorted. Riding in strange cars was always very disorienting for him. He had no idea how fast he was going, and the sound of the road varied with tires, pavement, and even the wind. Cedric had shown up at Howard’s with what he said was a new car. But there was none of the scent he equated with a “new” car, and the seats had enough lumps that Howard had to consciously keep from fidgeting. He only hoped he wasn’t riding in some sort of death trap.

“Howie,” Cedric began coaxingly, “it would be so much easier for me to help and take care of you if I was living with you. You need some help, and if I was there, I could make sure everything was the way you like it.”

On the surface the offer sounded good, and a few days ago, Howard probably would have said yes without question. Before what had happened. Cedric lived just down the street in a second-floor apartment. It was summer, and when Howard had opened his front door, he’d felt the sun on his face, so he’d decided to take a short walk. He’d picked up his cane and made sure he had his keys before he closed the door behind him and navigated the two steps down to the walk. Eight steps later, he reached the sidewalk and began his careful journey to Cedric’s. The air had been warm, and people must have had their windows open, because he’d heard snippets of conversation mixed with television programs as he made his way.

He knew where he was by the feel of each section of the sidewalk. To most people it felt the same, but to Howard’s keen senses, small differences in pitch, places where tree roots had raised slabs, even cracks, were like signposts telling him exactly where he was. At the large crack that made one piece of the walk rock slightly, Howard took two more steps, then made the turn as he verified with his cane that he was truly where he thought he should be. He took the twelve steps and climbed the three stairs to the porch in front of the house. He stepped across the porch, careful to avoid the loose floorboard. Howard felt for the doorbell and was about to ring it when faint sounds drifted down the fourteen steps he knew were in front of him.

Howard pulled open the screen door and quietly took a step inside. Yes, it was what he’d thought. Loud moans reached his ears, and then a cry of, “Fuck me,” in what was most definitely Cedric’s voice. Howard stood stock-still, unable to move.

A Harley Davidson rumbled as it came up the street, the potato-potato sound vibrating around him. Howard opened the door and stepped out, then let it close behind him. Then, as dejection cascaded off him, Howard had slowly made his way home.

“But you need help,” Cedric said again, and Howard refrained from grinding his teeth. “There are so many things I can do.” Cedric stroked Howard’s leg, so Howard pulled it away, shifting closer to the door. When they’d first met, Cedric had been solicitous. He’d helped without intruding and had actually made Howard’s life easier and better. Howard had fallen in love with him quickly—way too quickly, it turned out.

“I don’t think so,” Howard said. “Just give it a little more time.” They were on their way to a party being given by his friend Ken, and he just wanted to get there and have a nice evening. He should have canceled on Cedric and called to see if Ken could pick him up.

“I’ve given things plenty of time already. How long am I going to have to wait before we can be together?” Cedric asked. Instantly Howard regretted this whole thing and wished he was back home, where he wasn’t under Cedric’s control.

“Can we please talk about this after the party?” Howard asked levelly and as sweetly as he could manage.

“No,” Cedric said, and Howard felt the brakes being applied. A loud rumbling sounded as the car continued to slow.

“What’s happening?” Howard asked as the car pulled to a stop.

“Get out!” Cedric said roughly. “You think you’re so independent and don’t need me, then you can find your own way to the party. Now open the damned door and get the hell out.”

“Are you serious?” Howard asked, scared.

“Get the fuck out!” Cedric screamed, and suddenly Howard was more afraid of Cedric than anything else. Howard felt for the handle and pulled it. He pushed the door open and unfastened the seat belt. Then he carefully got out of the car and stood up. He closed the door. Tires squealed, and he turned away as bits of gravel pelted him. He listened as Cedric’s car sped up and the sound disappeared into the whizzing of traffic as it zoomed by him.

Howard didn’t move. He didn’t even have his cane with him. He had folded it up when he got into the car, and it must have shifted when Cedric braked, because he didn’t have it with him. Slowly, he took baby steps back from traffic. Just a few—he didn’t dare go any farther. He had no idea where he was or what was around him, other than cars passing by. Was there a ditch, a wire fence, a creek? He had no idea. At least he should be far enough back that he wouldn’t be hit. “Don’t panic, think,” he told himself as he pushed down the fear that welled inside him. With no points of reference other than the cars flying by and the ground under his feet, he was lost and getting more confused by the second. To make matters worse, the wind was coming up and the heat from the sun he’d felt when he’d first gotten in the car was gone. He inhaled deeply and groaned when he smelled water in the air. It was likely coming off Lake Superior, but it shouldn’t be in that direction. Either that or he was very turned around and even more lost than he thought. He patted his pockets quickly and found his phone. Breathing a small sigh of relief, he raised it to his ear. “Call Ken,” he said, and then he took a deep breath to calm his nerves.

“Ken,” Howard said when the phone was answered, but all he heard was a mumble. “Patrick, is that you?” Two simple vocal tones sounded. “I need Ken. We were on our way to the party and… well, Cedric and I had a fight, and he left me along the side of the road.” A long wait followed, and then he heard movement behind Patrick.

“Howard, what happened?” Ken asked as he came on the phone. “Patrick looks like he’s ready to kill someone. Are those cars I’m hearing? Are you by a freeway?”

“Howard, hon, the party is tomorrow,” Ken said softly. “We had to reschedule because Hanna needed to go in for some tests.”
“Is she okay?” Howard asked, forgetting for a moment about his predicament. Seven-year-old Hanna had been through leukemia treatments, and everyone hoped she remained cancer-free.

“She’s fine. Just routine follow-up,” Ken said. “I called you last week and… shit, Cedric answered your cell. Let me guess, he didn’t give you the message.”

“No,” Howard said, clutching the phone like a lifeline.

“Do you know where you are?” Ken asked. “We’re on our way to the car.” He heard a door close in the background.

“I must be someplace between Marquette and Pleasanton, but I’m not sure where. I’m by the highway. We’d been traveling for about ten minutes, I think, if that helps.”

“It does. Just stay on the line,” Ken said. “We’re leaving now.” The connection clicked, and for a second Howard thought he was going to lose them. “Hanna and Patrick are in the car with me. The phone is on hands-free, so I can drive.”

“Okay,” Howard said a bit nervously as cars continued to zoom by. “I think someone is stopping. God, I hope it isn’t Cedric coming back.”
“If it is, you tell him to hit the road. I’m driving as fast as I dare,” Ken said with energy, and Howard breathed a bit easier.
“Okay. The car is definitely stopping. But I don’t know if it’s Cedric’s.” He would have known the old one by the ticking sound the engine made, but he hadn’t immediately registered a unique sound for Cedric’s latest car. Howard heard a car door slam closed and he flinched slightly.

“Yes, please,” Howard said, turning toward the sound of the voice. “I have friends coming to get me. Can you tell me exactly where I am?”

“I’m blind and I got dumped here. My friends are on the way, but I’m not sure where I’m at,” Howard said, hoping the guy didn’t decide to rob him or something.

“You’re between mile markers 135 and 136, or pretty close,” he said, and Howard relayed the message to Ken.

“Where were you headed?” the stranger asked.

“No wonder. You’re going the other way,” he told him, and Howard swore.

“He did this on purpose,” Howard said mostly to himself. “The bastard did this to me on purpose.”

“Why would he do that?” both Ken and the stranger asked in each ear, and Howard shook his head.

“I’ll stay with you until your friends arrive,” the man said. “They can call you when they get close.” Howard relayed the message to Ken, who swore again.

“Daddy, you swore… lots,” Hanna sang. “Potty mouth. Does that mean Daddy Patrick will wash your mouth out with soap?”

Ken groaned, but didn’t swear. “I’ll be there as soon as I can explain what’s going on,” Ken said.

“Call when you’re close. I’ll be okay.” He hung up but held onto his phone.

“You can sit in my truck if you want,” the man said. Howard heard him take a step closer, and he tensed. The man’s touch on his arm made him jump, but only for a second. “Sorry. I didn’t mean to startle you. Let me guide you toward the truck.” His touch was gentle and he stayed slightly behind, guiding rather than tugging Howard forward. Cedric had never gotten the hang of walking with him. He’d always tried to pull Howard along. “I’m Gordon Jarrett, but my friends call me Gordy.”